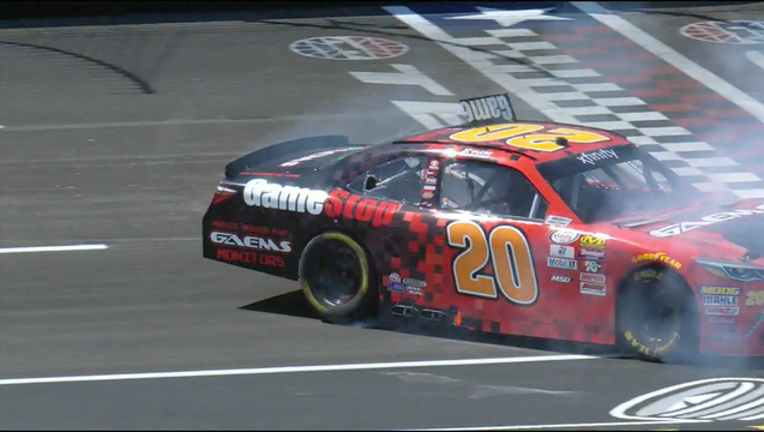 FORT WORTH, Texas (AP) - Erik Jones skipped his high school graduation ceremony three years ago to run in a NASCAR truck race at Texas, where he was presented his actual diploma before the event.

Two years ago, he went to Victory Lane at Texas Motor Speedway for the first time in the NASCAR Xfinity Series.

On Saturday, he won again at the 1 1/2-mile track that has since been completely repaved and reconfigured in Turns 1 and 2.

"Yeah, it's been a good track for me," Jones said. "The first time I came here, it's funny, it really wasn't that good to me, but after that it just kind of clicked and I felt really good here ever since."

Jones led 112 of 200 laps for his seventh career Xfinity victory, four of them coming on 1 1/2-mile tracks.

Jones finished a half-second ahead of Ryan Blaney, another full-time Monster Energy NASCAR Cup Series driver and the second-place qualifier for Sunday's race. Blaney led 43 laps and went into his final pit stop still with the lead before Jones went back in front for good on lap 156.

Only nine drivers finished on the lead lap.

Kevin Harvick, the polesitter for Sunday's Cup race, finished third more than 21 seconds off the lead, ahead of Austin Dillon and Cole Custer.

Darrell Wallace Jr. overcame a spin 67 laps into the race to finish sixth, the fifth consecutive race in that position. That is the second-longest streak in the series with the same top-10 finish, one behind Jack Ingram's string of six consecutive runner-up finishes in 1983.

Elliott Sadler kept the Xfinity season points lead after a 10th-place finish, the first driver off the lead lap. But his gap over William Byron, who finished seventh and got points in the first two stages, was trimmed from 17 to six points.

Still only 20, and now a full-time driver in the upper-level Monster Energy NASCAR Cup Series for Furniture Row Racing, Jones got his fifth top-five finish in his five Xfinity races at Texas in the No. 20 Joe Gibbs Racing Toyota.

"I always felt really comfortable on the old track here, I knew what I needed the car to do," Jones said. "Honestly, the new surface here, I felt like I was able to get back to what the car needed. Definitely more challenging too on this surface than the old surface. A good day of learning."

Jones will be in a backup Cup car after his crash in practice Friday, and will start 36th in the 40-car field.

"The repave was really treacherous to start the weekend and this is a nice way to bounce back for myself after going to a backup the other day in the Cup car," he said. "Hopefully this is a good start for tomorrow."