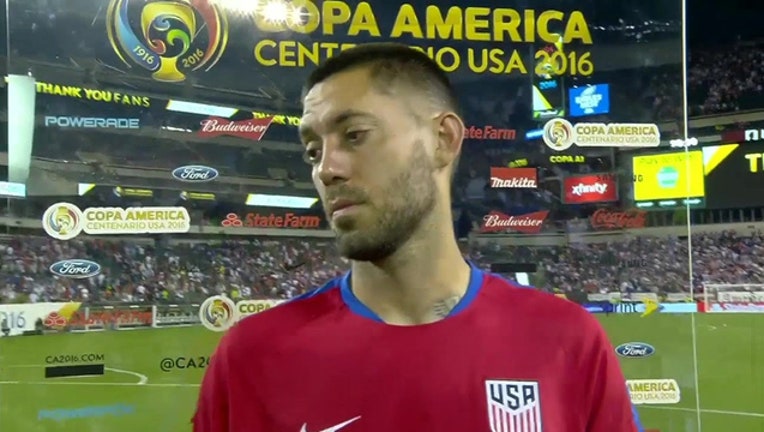 COMMERCE CITY, Colo. (AP) - On the three-hour drive home from soccer practice when he was younger, Clint Dempsey and his father would routinely purchase a lottery ticket. They spent the rest of the trip discussing their plans for the jackpot.

The tickets never paid off. Dempsey's talent certainly did.

The 34-year-old forward has 56 international goals, one from tying Landon Donovan's U.S. record. Dempsey is far more concerned with something bigger - getting this team back to another World Cup, where he could join Pele, Uwe Seeler and Miroslav Klose as the only players to score in four editions of soccer's showcase tournament.

"While you're playing, you try to enjoy it and have fun and make the most of it," said Dempsey, whose team plays an exhibition game Saturday in Utah against Venezuela before a pair of World Cup qualifiers. "I've enjoyed my career and hopefully there's a little bit more time left."

Dempsey had a health scare when he was diagnosed with an irregular heartbeat last summer. The Seattle Sounders standout missed the final four months of the Major League Soccer season, but returned to training in January and is off to a strong start for the Sounders with four goals.

His heart issue did cause him to "stop and smell the roses a little bit more," he said.

"I've always been someone who's been competitive. I'm still competitive now," Dempsey added . "After going through what I went through, I still want to make the most of my career in the time I have left."

The U.S. has qualifiers against Trinidad and Tobago on June 8 in Colorado and another at Mexico three days later. Dempsey has never scored a goal against El Tri.

"Only gotten a few assists against them. Yeah, would be great to break any record," Dempsey said. "But most importantly it would be even better to qualify."

Dempsey has never brought up the scoring record with Donovan, a teammate at the 2006 and 2010 World Cups and now a broadcaster for Fox. There's no need to.

"It's kind of like golf - you go out there and put up the number you put up," Dempsey said. "Obviously, if there are people in front of you, you kind of know what you need to do. If you're the guy leading the pack, it's up to you to push yourself. That's how you look at it."

Dempsey has always had a knack for big goals for the U.S.

A few of his highlights:

- Finding the net against Egypt, Spain and Brazil as the U.S. reached the 2009 FIFA Confederations Cup final

- A goal in a February 2012 exhibition at Genoa that gave the U.S. its first win over Italy in 11 games over 78 years

"Clint is a guy who has given us so much on so many days," said Michael Bradley, who succeeded Dempsey as U.S. captain two years ago. "Anytime you step on the field with him, you know that he's going to be ready to give everything he has to the team to try to make a difference."

For that sort of diligence, Dempsey credits his parents, who used to drive him back and forth from Nacogdoches, Texas, to Dallas for practices and games. On the drive there, he would concentrate on homework. On the drive back, he would try to stay up as best he could to talk to his parents. The discussions over what to do with a winning lottery ticket always kept him wide awake.

"I feel like I did (win the lottery), in terms of being able to take care of my family in a good way ... Pay them back for all the stuff they did for me," said Dempsey, who played for Fulham and Tottenham before signing with Seattle as a designated player in 2013.

He's a leader for the U.S. team under coach Bruce Arena, who gave Dempsey his national team debut in 2004 and returned last November. Dempsey's approach is to just be himself.

"You keep that same mentality and try to set the tone by your actions rather than by always speaking," Dempsey said.

He's driven by a sense of urgency being in the twilight of his career.