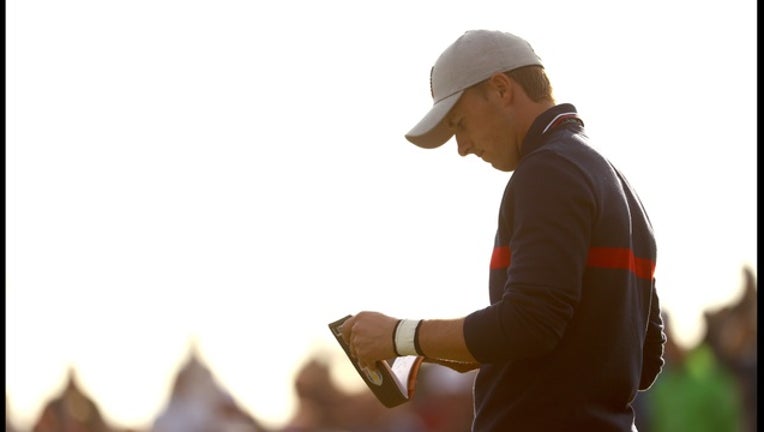 PARIS, FRANCE - SEPTEMBER 28: Jordan Spieth of the United States looks on during the afternoon foursome matches of the 2018 Ryder Cup at Le Golf National on September 28, 2018 in Paris, France. (Photo by Jamie Squire/Getty Images)

He somehow forced a weak smile.

Maybe it was the only way to keep from crying.

Maybe he was trying to suppress the doomed feeling that sweeps over so many U.S. Ryder Cup captains when they realize what they've gotten themselves into.

As the winds started to whip across Le Golf National, the Europeans clearly felt right at home. And just like that, Furyk's group of American superstars suddenly looked cold and tired and defeated, a mere shadow of the group that swaggered through the morning losing only a single point in fourballs.

The afternoon foursomes quickly turned into a rout of historic proportions, the scoreboard filling with blue numbers - Europe's color - as one U.S. team after another wilted away.

By the time it finished - and if you were waiting for a match at the 17th or 18th holes, you didn't even see a shot - the Europeans had swept all four points in a session for the first time since 1989. For the first time ever, they tossed a shutout in foursomes, the format where two players take turns striking a single ball.

Thankfully for the Americans, it was only Friday. As Furyk rightfully pointed out, there's plenty of time to rally over the next two days, with 20 points still on the table for a U.S. team that needs a 14-14 tie to retain the prize it recaptured two years ago at Hazeltine.

"We've played for eight points so far out of 28," Furyk said, looking for any bright spot he could find. "The event's still pretty young."

To predict the Americans are all done would be pure folly. This is an immensely talented team, filled with major champions (including Tiger Woods for the first since 2012) and 11 of the top 17 players in the world golf rankings.

They didn't suddenly forget how to play this game during one lost afternoon in the Paris suburbs.

"I think our guys will respond, I really do," Furyk said hopefully. "Obviously, it's going to leave a sour taste in their mouth tonight and they have to sleep on that. We'll come back tomorrow, and I bet we'll be fine."

But Furyk certainly has some issues to sort out, most notably what role Phil Mickelson will play the rest of the weekend.

At age 48, Lefty is the oldest player at the Ryder Cup. He has only one victory in the last five-plus years. His driving statistics are atrocious, which is really a hindrance on the Albatross course, with its tight fairways and thick rough.

Mickelson sat out the morning session, then came out in the afternoon paired with Bryson DeChambeau. They turned in a brutal performance against Sergio Garcia and Alex Noren, losing five straight holes to make the turn 7 down. A couple of late birdies were mainly for pride. The Europeans romped to a 5-and-4 victory.

"I thought if we could shoot around par, it would be a heck of a day," Mickelson said. "We played poorly on the front, but they shot 4 under. It was just some very impressive golf, and we just didn't keep up."

Furyk expressed no regrets about picking Mickelson for the team, pointing to a resume that's better than anyone in the team room except Woods. But it might be a good idea to sit him for both sessions Saturday and hope he can muster some of the old magic for the singles competition on Sunday.

"I realize the golf course is tight. I realize you have to hit a lot of fairways," Furyk said. "It's also a place where you're probably not hitting a lot of drivers if you're Phil Mickelson. You're hitting a lot of 3-woods and a lot of irons. Looking at his game, he's a very good iron player, so I felt comfortable."

Furyk pointed out that the Mickelson-DeChambeau pairing wasn't much worse than the other U.S. foursome teams. He certainly had a point.

Dustin Johnson and Rickie Fowler managed only one birdie in their 3-and-2 loss to Henrik Stenson and Justin Rose. Bubba Watson and Webb Simpson had just two in a 4-and-2 loss to Rory McIlroy and Ian Poulter. Jordan Spieth and Justin Thomas were downright atrocious, coughing up four bogeys and a single bogey in their 5-and-4 blowout at the hands of Francesco Molinari and Tommy Fleetwood.

"Their scores," Furyk said of Mickelson and DeChambeau, "were pretty similar to pretty much the best scores we had on the team."

There were also questions about Woods' health.

Coming off his thrilling victory at the Tour Championship, he teamed with Patrick Reed in the morning - the only U.S. fourballs loss, it turned out - but sat in the afternoon. Furyk dismissed any speculation that Woods' surgically repaired back was acting up again, or that he'll be limited to one round a day as a precaution.

Woods will be back on the course Saturday morning for another fourballs session. After that, Furyk will have some decisions to make. Does he let Woods play again? Does he bench Mickelson?

Paul Newberry is a sports columnist for The Associated Press. Write to him at pnewberry@ap.org or at www.twitter.com/pnewberry1963 . His work can be found at https://apnews.com/search/paul%20newberry