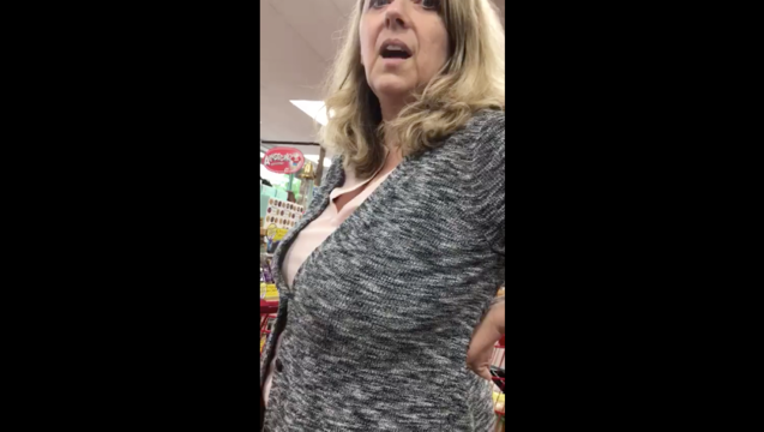 WASHINGTON - In a video gone viral on Facebook, an unidentified woman appears to tell a Muslim shopper who allegedly let her go ahead in line, “I wish they didn’t let you in the country." The encounter allegedly took place at a Trader Joe’s in northern Virginia over the weekend, according to a South Carolina-based comedian who posted the video, claiming the Muslim woman involved in the incident is his friend.

Comedian Jeremy McLellan posted the video on Facebook just before midnight on Saturday. In the post, he writes that the video was shot Saturday at the Trader Joe’s in Reston, and that he has confirmed it is real. The woman who shot it McLellan's friend, who she wishes to remain anonymous.

The entire encounter between the two women is not shown in the video, but McLellan’s post details his friend’s account of what happened in the line:

McLellan writes that his friend, who is a Muslim woman, offered to let the woman seen in the video go in front of her in line because she was in a hurry. It was at that point, McLellan writes, that the woman “started talking bad” about another Muslim woman in the store, who was wearing a niqab, which is a type of head covering. McLellan’s post says the woman then asked his Muslim friend why she didn’t cover as well, and his friend replied that it was a choice.

“The woman didn’t believe her and started talking about FGM (female genital mutilation) and telling her “I wish they didn’t let you in the country.”

He writes that that’s when his friend started filming.

McLellan says his friend has decided not to do any interviews, but was allowing media outlets to use her video with credit. Her name was not given.

Here’s what is seen in the video: (App users: click here to watch)

The unidentified shopper is seen wearing black loafers and jeans, and when the video begins, she says, “So you play dumb, and then you say everybody’s— okay. I got it.”

There’s a pause, and then the woman identified as McLellan’s friend, behind the camera, says, “I shouldn’t have let you in front of me.”

“I wish they didn’t let you in the country,” the unidentified woman counters.

“Excuse me?” McLellan’s friend responds. “I was born here.”

“Oh, you were?” the woman responds.

After another long pause, the woman says, “Obama’s not in office anymore. We don’t have a Muslim in there anymore.”

“Yeah, I wish he was,” the Muslim woman says.

“He’s gone. He’s gone,” the woman says, smiling. “He may be in jail, too, in the future,” she adds as she glances down in the direction of the camera briefly.

“You look a little crazy. Maybe you need to get some help,” McLellan’s friend responds.

“No, you’re not,” McLellan’s friend counters. “Because you don’t just strike up a conversation with people in line talking about stuff like that if you’re normal.”

“Yeah, looks like it. I can tell,” McLellan’s friend says.

“What set you off? Obama?” the woman says, opening her purse, says before the video stops.