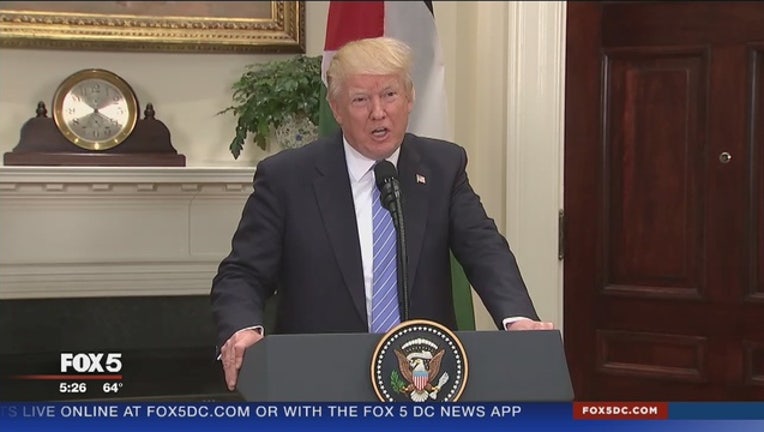 WASHINGTON (AP) - President Donald Trump said Thursday his first foreign trip as president will feature stops in Saudi Arabia, Israel and the Vatican, where he will meet with Pope Francis, an ambitious foray onto the world stage that will include meetings with NATO and a summit in Italy.

Senior administration officials said Trump chose Saudi Arabia as his first stop to show his commitment to improving U.S. relations with the Muslim world. Trump will meet with Saudi Arabia's King Salman and other leaders where they are expected to discuss efforts to defeat terrorism and discredit radical ideologies, the officials said, speaking on condition of anonymity to describe internal planning.

Trump, joining religious leaders in the Rose Garden on Thursday, said his first foreign trip would "begin with a truly historic gathering in Saudi Arabia with leaders all across the Muslim world."

"Saudi Arabia is the custodian of the two holiest sites in Islam and it is there that we will begin to construct a new foundation of cooperation and support with our Muslim allies to combat extremism, terrorism and violence and to embrace a more just and hopeful future for young Muslims in their countries," Trump said.

The weeklong trip will mark the president's first trip abroad and come about six weeks after the U.S. launched Tomahawk missiles against a Syrian air base in the aftermath of a chemical weapons attack in the war-ravaged country.

The trip will inject Trump into the thorny quest for Middle East peace, a prospect that has proven elusive for Trump's predecessors.

The announcement follows Trump's meeting on Wednesday with Palestinian leader Mahmoud Abbas and his optimistic pledge to mediate peace efforts between the Israelis and the Palestinians.

Trump has sought to forge strong ties with Israel's Prime Minister Benjamin Netanyahu at the start of his presidency in hopes of facilitating peace. The visit to Israel will reinforce that alliance, officials said.

"Our task is not to dictate to others how to live but to build a coalition of friends and partners who share the goal of fighting terrorism and bringing safety, opportunity and stability to the war-ravaged Middle East," Trump said.

The Palestinians want to create a state in the West Bank, Gaza Strip and east Jerusalem, lands Israel captured in the 1967 Mideast war. Abbas noted that demand when he joined Trump at the White House.

But Netanyahu has rejected the 1967 frontier as a baseline for border talks and ruled out partitioning Jerusalem where Palestinians hope to establish a capital. Netanyahu's government has expanded settlements despite U.S. efforts to curb the construction.

The White House had said previously that Trump would travel to Belgium for the NATO meeting and Italy for the G7 summit before Memorial Day. The president previously called NATO "obsolete" but has since recanted after listening to European leaders make the case for the military alliance.

Trump will be making his first overseas trip late into the start of his presidency compared to his predecessors. Former President Barack Obama visited nine countries by late April 2009, his first three months in office, meeting with allies such as Canada, Britain and Germany. The last first-term president to wait until May to venture abroad was Jimmy Carter in 1977.

Trump and Francis couldn't be more different in their approaches to some of the pressing issues of the day, with immigration and climate change topping the list.

Francis has spoken of the need for bridges between nations, not the walls that Trump has called for. He has called for an end to the use of fossil fuels, while Trump has pledged to cancel payments to U.N. climate change programs and pull out of the Paris climate accord.

But both share a populist appeal and speak with a down-to-earth simplicity that has endeared them to their bases of supporters. And both share a common concern about the plight of Christians in the Middle East at the hands of Islamic militants.

Francis recently called for the U.S. and North Korea to step away from the brink and use negotiations and diplomacy to diffuse tensions on the Korean peninsula - an issue that is likely to feature in any Vatican audience.

During the campaign, when asked about Trump's border wall with Mexico, Francis famously said anyone who wants to build a wall is "not Christian." Trump shot back that it was "disgraceful" for a religious leader to question someone's faith.

This story has been corrected to show that Benjamin Netanyahu's title is prime minister, not president.