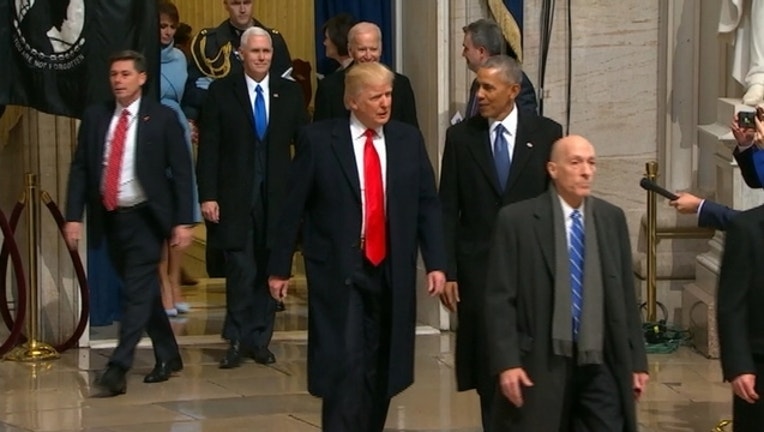 WASHINGTON (AP) - President Donald Trump blamed former President Barack Obama on Tuesday for "weakness" that he said led to a reprehensible chemical weapons attack by Syria's government, while his secretary of state said Russia and Iran bore moral responsible for the deaths.

In a series of strongly worded statements, Trump's administration sought to convey a forceful response to the attack in Syria's rebel-held northern Idlib. Trump said the attack against innocent people mustn't be "ignored by the civilized world."

"These heinous actions by the Bashar al-Assad regime are a consequence of the past administration's weakness and irresolution," Trump said, in a reference to Obama's failure to strike in 2013 after saying a chemical attack by Assad would cross a U.S. red line.

Trump left it to his top diplomat, Secretary of State Rex Tillerson, to assign at least some blame to Russia and Iran, Assad's most powerful allies. Tillerson called on both countries to use their influence over Assad to prevent future chemical weapons attacks. He noted Russia's and Iran's roles in helping broker a ceasefire through diplomatic talks that have occurred in the Kazakh capital of Astana.

"As the self-proclaimed guarantors to the ceasefire negotiated in Astana, Russia and Iran also bear great moral responsibility for these deaths," Tillerson said.

Both Trump and Tillerson referred in written statements to a chemical weapons attack, rather than a suspected attack, suggesting the U.S. has reached some degree of confidence about what took place in Idlib.

At the White House earlier Tuesday, spokesman Sean Spicer said the White House had received a number of phone calls from European allies questioning how it would address the problem, pressing Trump's "America First" administration to take a bold position on this civil war that has killed hundreds of thousands and prompted the worst refugee crisis since World War II.

"I'm not ready to talk about our next step but we'll talk about that soon," he said.

The attack Tuesday, in Khan Sheikhoun in Idlib province, is believed to have killed dozens of people, activists on the ground describing the attack as among the worst in the country's six-year civil war.

Obama gave the Assad government an ultimatum that the use of chemical weapons in any circumstance would result in consequences. But those consequences never came - the landscape growing more complicated by the rise of radical groups like Jabhat al-Nusra, and later, the Islamic State group. And while government-backed forces are blamed for launching unrelenting attacks on civilians opposing his rule, many warn that removing Assad now would only create a vacuum for those groups to overrun the country.

Syrian opposition activists claimed that the attack was caused by an airstrike carried out either by the Syrian government or Russian warplanes. Russia's Defense Ministry categorically rejected the claims.

Russia's role in Syria was a matter of extreme contention between Moscow and Washington under the Obama administration. Then-Secretary of State John Kerry called for both Syria and Russia to be investigated for war crimes in connection with attacks on civilians.

In Turkey on Thursday, Tillerson was touting a new message: "The longer-term status of President Assad will be decided by the Syrian people."

Spicer on Tuesday rejected the notion that there is a "comfort level with Assad," describing the administration's position as a reflection of "a political reality." He would not elaborate.