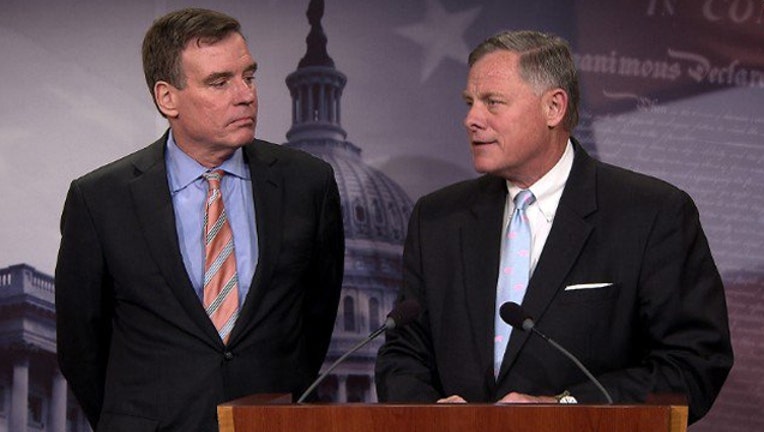 WASHINGTON (AP) - Pledging cooperation, the top Republican and Democrat on the Senate intelligence committee said Wednesday they would steer clear of politics in their panel's probe of Russian interference in last year's election. They made a point of putting themselves at arm's length from the House investigation marked by partisanship and disputes.

Standing alongside his committee' ranking Democrat, Sen. Mark Warner of Virginia, Burr said: "Mark and I work hand in hand on this. ... We're partners to see that this is completed and that we have a product at the end of the day that we can, in bipartisanship, support."

So far, the committee has requested 20 individuals to be interviewed. Five have been scheduled, and the remaining 15 are likely to be scheduled within the next 10 days. Additional witnesses could be interviewed.

Burr declined to identify any of them, except for Trump's son-in-law, Jared Kushner. The White House has said that Kushner, a senior adviser to Trump, has volunteered to answer questions about arranging meetings with the Russian ambassador and other officials.

On the House side, Democrats have called for intelligence committee Chairman Devin Nunes to recuse himself because of his previous ties with Donald Trump's team before Trump took office. The investigation includes looking at contacts the Russians may have had with Trump associates.

Nunes, R-Calif., also met with a secret source on the White House grounds last week to review classified material, which he says indicates that Trump associates' communications were captured in "incidental" surveillance of foreigners. Trump has used Nunes' revelations to defend his claim that former President Barack Obama tapped phones at Trump Tower in New York, though Nunes and his committee's top Democrat, Adam Schiff of California, say there is no such evidence.

In response to a reporter's question, Burr said he had not personally coordinated with the White House in shaping the scope of the Senate committee's investigation.

Asked if he could promise to oversee an impartial probe, Burr responded: "Absolutely. I'll do something I've never done. I'll admit I voted for him (Trump). ... But I've got a job in the U.S. Senate and ... it overrides any personal beliefs that I have or loyalties that I might have."

Warner said he had seen no evidence the White House was interfering and would complain publicly if he did.

Ahead of Thursday's Senate hearing, Warner pledged to keep the investigation focused on the reason it was started.

"An outside foreign adversary effectively sought to hijack our most critical democratic process - the election of the president - and in the process decided to favor one candidate over another," Warner said. "I can assure you, they didn't do it because it was in the vested interest of the American people."

"Russia's goal, Vladimir Putin's goal, is a weaker United States - weaker economically, weaker globally - and that should be a concern to all Americans, regardless of party affiliation."

Burr said the investigation's mission is to look at all activities Russia might have undertaken to alter or influence the election and to examine contacts any campaign had with Russian government officials that could have influenced the process.

He said committee staff members have been provided with an "unprecedented amount" of documents, including some that, up until now, have been shared only with the so-called Gang of Eight - the Republican and Democratic leaders of both the House and Senate and the four leaders of the intelligence committees plus their staff directors.

Warner said some intelligence agencies have not been as cooperative as others in providing materials, and he declared, "We cannot tell the American people our conclusions unless we have access to all the pertinent information."

Burr said the committee was in constant negotiations with intelligence officials about access to additional documents.