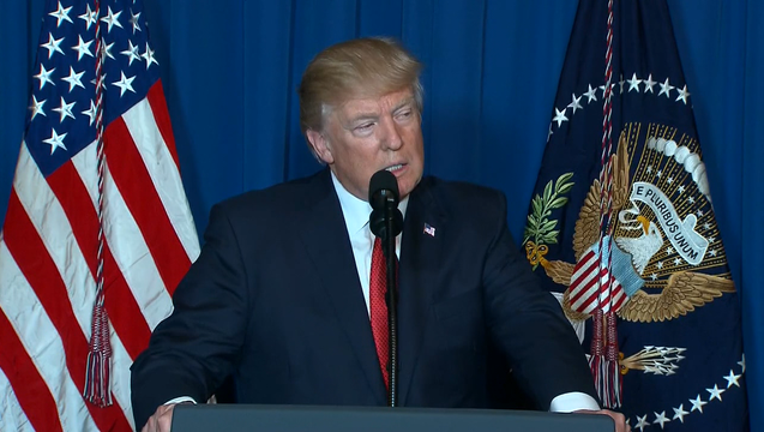 WASHINGTON (AP) - To those who think President Donald Trump should be driven from office, history would say: Good luck with that.

Removing a president between elections is tough by design, though mechanisms exist. Trump could simply ride out the storm, as various presidents in hot water have done - or find himself on a constitutional or political avenue to an exit.

Here's a look at end-game scenarios that Trump foes dream about and allies may (or may not) have reason to worry about:

The beating heart of the matter is a memo James Comey wrote to himself and shared with others in the FBI weeks before Trump fired him as the bureau's director. The memo alleges Trump asked him to end the FBI's investigation of Michael Flynn, who had just been removed as Trump's national security adviser after lying about his Russia contacts. If true, the allegation may point to obstruction of justice - Watergate-level wrongdoing by a president. Or it may be judged to fall short of criminal obstruction.

More broadly, the FBI is pressing ahead with its investigation into possible coordination between Trump's campaign and Russian officials. Two congressional committees are investigating, too, and disclosure of the Comey memo has intensified calls for a special prosecutor or an independent committee to get to the bottom of it all. So, more is to emerge in an episode that already risks political paralysis in Washington.

Meddling in a federal investigation by asking it to stop could qualify as obstructing justice. That's if the president was trying "corruptly" to influence the Flynn probe. Intent is key, and can be hard to pin down. Congressional leaders are seeking a copy of the memo and other records that might exist on Trump's interactions with Comey, and they want the ousted FBI chief to testify at hearings.

Two presidents have been impeached, Andrew Johnson in 1868 and Bill Clinton in 1998. Both were acquitted by the Senate. So no president has been driven from office by an impeachment. But a looming impeachment of Richard Nixon, when his support from fellow Republicans had collapsed and devastating evidence had emerged against him, drove him to resign.

Long story short: Nixon was complicit in the cover-up of a politically directed burglary of Democratic headquarters at the Watergate building and related misdeeds. The House Judiciary Committee voted to impeach him but he resigned before the full House voted on the matter.

It starts in the House of Representatives. The House can bring one or more articles of impeachment against a high official with a simple-majority vote. When it does so, that's a charge of "treason, bribery, or other high crimes and misdemeanors," not a conviction. A trial then is held by the Senate, with the Supreme Court chief justice presiding if the accused is the president. The Senate can find the accused guilty and remove that person from office with a two-thirds majority vote.

HOW IT WORKED WITH CLINTON

The Republican-led House impeached Clinton on charges of lying under oath and obstructing justice in his affair with intern Monica Lewinsky. The trial lasted five weeks in the Republican-controlled Senate, with senators sworn in as jurors, and ended with acquittal. The Senate split 50-50 on the charge of obstructing justice, well short of a two-thirds majority, and voted 55-45 that he was not guilty of perjury.

HOW IT WORKED THE FIRST TIME

After the Civil War, Johnson clashed with a Republican-controlled Congress over reconstruction of the South and his firing of Abraham Lincoln's war secretary, Edwin M. Stanton. The House approved 11 articles of impeachment and the Senate pursued three, each time falling one vote short of a two-thirds majority. Johnson, acquitted, finished his term.

THERE'S ANOTHER WAY, AND IT'S CONVOLUTED

Meet the 25th Amendment. It came into effect in 1967, as a way to clarify the Constitution's lines of succession after a calamity like John Kennedy's 1963 assassination. It wasn't drawn up to replace unpopular or incompetent presidents but to set a clear process of continuity if a president is disabled, temporarily or permanently, or otherwise unable to fulfil duties. Its use has been non-controversial, guiding Gerald Ford from the vice presidency to the presidency when Nixon stepped down and Ford's successor as vice president, for example.

It would take a massive loss of confidence from Trump's aides and fellow Republicans in Congress for this to work against him. A vice president and a majority of a Cabinet can temporarily sideline a president. For that to stick and a vice president to finish out a president's term, it would require a two-thirds majority vote in both houses of Congress.