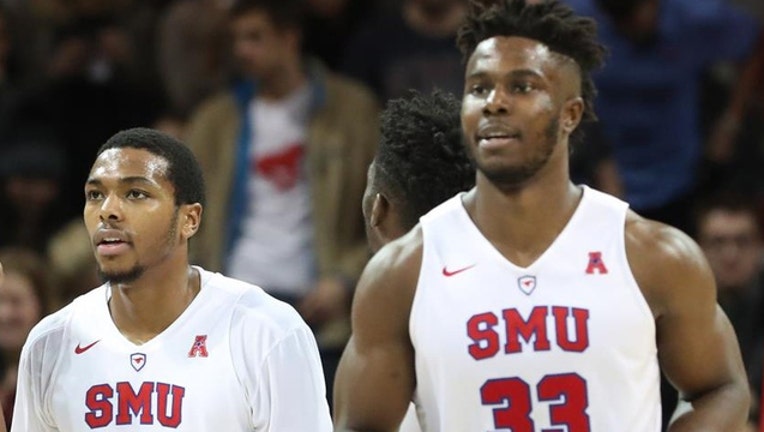 SMU's Semi Ojeleye and Sterling Brown were selected in the NBA Draft Thursday night, marking the first time a Mustang was picked since 2001.

The Boston Celtics took Ojeleye with the 37th pick. The pick was a few spots lower than where most mock drafts predicted Ojeleye to go. Many draft experts thought he would be taken in the first round.

Ojeleye won the American Athletic Conference Player of the Year for the 2016-17 season after putting together a dominant campaign. He averaged 19 points and 6.9 rebounds per game on 48.7% shooting.

"I think the NBA is getting more position-less," Jankovich told ESPN 103.3 FM - Dallas. "I think he can play more positions because he can guard more positions. So any time you play that way, you can give yourself more playing time and be more valuable."

Ojeleye's college career was not traditional, as he transferred to SMU after getting sparse playing time at Duke. He showed admirable patience, waiting a year and a half to get on the court with SMU.

"He did an awful lot for our city and for SMU and our program," Jankovich said. "It's a great story. How can you not pull for a guy who was fairly highly touted out of high school, has no success at Duke... A lot of guys would be crushed. But he worked and worked. He goes from oblivion into a draft choice. No one deserves it more."

Ojeleye will face a tough competition for minutes at the forward spot. The Celtics already boast a quality small forward in Jae Crowder, as well as the third overall picks in the 2016 and 2017 drafts, forwards Jaylen Brown and Jayson Tatum.

Brown was picked 46th by the Philadelphia 76ers, but the Milwaukee Bucks are finalizing a trade for him.

Brown put together a memorable career at SMU, finishing his career there with the most wins in program history. He averaged 13.4 points, 6.5 rebounds and 3 assists in his senior season at SMU.

He will be joining a team on the rise in the Bucks, as 22-year-old superstar forward Giannis Antetokounmpo led them into the playoffs last season. In the playoffs, the Bucks lost a competitive series to the Toronto Raptors in the first round.

Brown, a shooting guard, could earn some minutes if he makes the Bucks' roster, as their starting shooting guard from last season, Tony Snell, is a free agent.

No draft had featured two SMU players since 1985, and Thursday night was the first time two Mustangs had been taken in the first two rounds of the draft. No SMU player has played in the NBA since Quinton Ross in 2011.