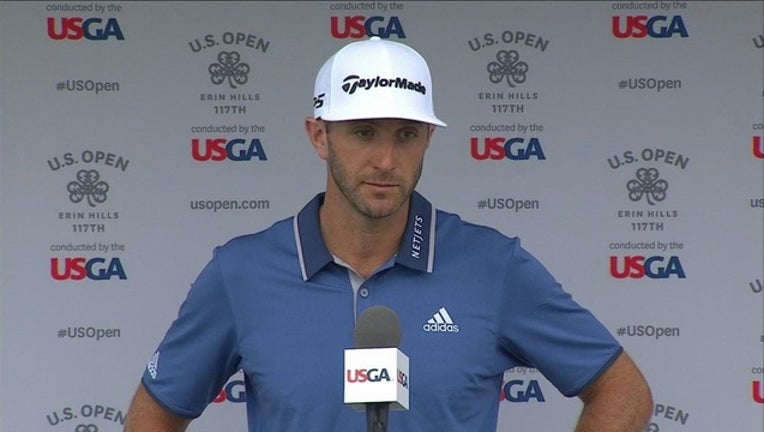 ERIN, Wis. (AP) - Dustin Johnson, Rory McIlroy and Jason Day made the wrong kind of history at the U.S. Open.

They're all leaving early.

For the first time since the Official World Golf Ranking began in 1986, Nos. 1, 2 and 3 all missed the cut in a major. Johnson capped off this collective failure with a late collapse on the back nine at Erin Hills, making three bogeys over a five-hole stretch and closing with a 73.

He three-putted on No. 13. He hammered a chip from just short of the par-5 14th that led to another three-putt bogey. And then he came up short of the 17th green and dropped one more shot that sent him home early to spend time with his newborn son.

Day and McIlroy never had much of a chance either, both out of the picture before Johnson even teed off.

And they had even more company.

Eight of the top 12 in the world will not be around for the weekend at this most unusual U.S. Open, where the top 60 and ties advanced to the final two rounds. The cut was at 1-over 145, tying a U.S. Open record set in 1990 at Medinah.

Johnson also missed the cut at the Memorial, so this was the first time since 2013 (Pebble Beach, Riviera) that he has missed the cut in consecutive events.

Day at least managed to find one positive spin.

"Guess what?" he said to his 4-year-old son. "We get to go home today because Daddy played poorly."

That's something Day, the No. 3 player in the world, rarely says at a major.

Day shot a 75 for a two-day total of 10-over 154, ending at 17 the longest active streak of making the cut in the majors. The last time Day missed a cut in a major was the 2012 PGA Championship, just a month after his son was born.

He never would have guessed it.

"I felt the most calm I have in a major in a long time this week," said Day, who arrived last Friday. "And just unfortunately, this didn't pan out."

It didn't for McIlroy, either.

McIlroy, the No. 2 player in the world, also arrived last Friday having missed the last month to rest a nagging rib injury. He loved Erin Hills, a course with wide fairways between the knee-high fescue that he figured would allow him to attack. If only he had hit the fairways.

McIlroy was never in the short grass from the 11th hole to the end on Thursday when he opened with a career-worst 78, and he didn't do nearly enough in the second round until it was far too late. And even that was frustrating.

Sure, he birdied four of his last six holes to salvage a 71 and finish at 5-over 149. But he missed a pair of 10-foot birdie chances in that stretch, and one of the birdies he made was a two-putt from 20 feet on the par-5 seventh.

"Show up for the last six holes, anyway," McIlroy said.

It was the second straight year McIlroy missed the cut at the U.S. Open.

McIlroy dismissed the notion of being rusty before the tournament, but conceded on his way out of Wisconsin that he hasn't played nearly enough. He missed nearly two months at the start of the year when he was diagnosed with a slight rib fracture, and then the latest break after The Players Championship.

The U.S. Open was only his sixth start this year.

His schedule will pick up immediately. McIlroy is headed for the Travelers Championship next week in Connecticut, and he has three straight tournaments starting with the Irish Open through the British Open.

"Even though it's very disappointing to not be here on the weekend, I think these last two rounds will serve me well going into the summer," McIlroy said.

Day thought his game was perfectly suited for Erin Hills. He is long and straight off the tee and an excellent chipper from closely mown areas around the green. But he wasn't doing much of anything right, especially off the tee.

"The biggest thing about this course is that the fairways are massive," Day said. "But when you're visually looking down the fairway, I think when you're trying to aim at a target at a normal golf course, with normal width fairways, there's some pressure into hitting the fairway because it is a lot narrower than we have out here. And I think with everything so large, your target is larger and your misses get even more extreme.

"Being out of position off the tee does not help," he said. "The execution was not there."