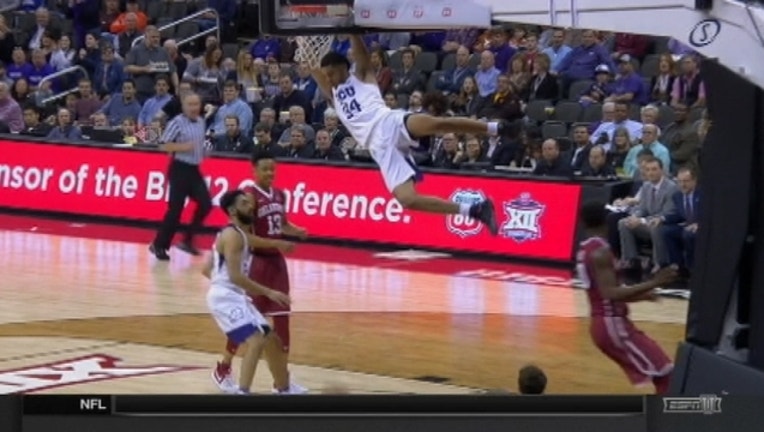 KANSAS CITY, Mo. (AP) - Jaime Dixon looked back at the seven-game losing streak that TCU carried into the Big 12 Tournament and felt oddly encouraged, thanks in large part to the number of close games the Horned Frogs played.

They took Iowa State to the wire. Ditto for West Virginia and Kansas State.

"I felt good about this team," Dixon said, "even though we had a long stretch of losing tight."

Well, there was nothing tight about TCU's tournament opener.

Vladimir Brodziansky had 20 points, Kenrich Williams added 19 and the eighth-seeded Horned Frogs routed No. 9 seed Oklahoma 82-63 on Wednesday night to roll into the Big 12 quarterfinals.

"It means a lot that we get to go on, but like coach said, we can't get too high or too low," said TCU's Alex Robinson, who had 17 points and nine assists without a turnover. "We have to treat every game the same, prepare for it like we did this one."

Jaylen Fisher also scored 11 for the Horned Frogs (18-14), who used a 15-2 run to close the first half and assume control, then punched the Sooners (11-20) with a second-half run to put the game away.

Khadeem Lattin had 18 points and Kristian Doolittle scored 11 for the rebuilding Sooners, who had won lost their 20th game in a season for the first time in school history and won their tourney opener the last two seasons.

But those teams were anchored by stars such as Buddy Hield, Ryan Spangler and Isaiah Cousins, all of whom graduated last year. This bunch didn't even have senior guard Jordan Woodard on the floor in the Sprint Center after he tore the ACL in his right knee with six games left in the season.

"It's been an emotional year, for sure. We've had some woes. But we grew a lot this year," Lattin said. "I'm just excited for what we're going to do next year."

The game was tied 29-all with 3:59 left in the first half when Williams scored the first of back-to-back baskets, kick-starting the Horned Frogs' first big run.

Robinson added a 3-pointer, Brodziansky scored while getting fouled and Williams finally capped a 15-2 charge with a basket just before the buzzer that gave the Horned Frogs a 44-31 advantage.

"That under-4 timeout in the first half, from that point on it seemed TCU dictated it," Oklahoma coach Lon Kruger said. "They did what they wanted to do. We were reacting for the next 25 minutes and again, I thought they played great. We didn't do the things we needed to do to make it difficult."

Oklahoma, despite missing five straight free throws, did trim its deficit to 55-48 midway through the second half. But the Horned Frogs responded with another run, this time fueled by Brandon Parrish, who hit his first two baskets of the game to help stretch the lead back out.

Part of the Horned Frogs' success came from a zone defense that gave Oklahoma fits.

"We noticed when we switched defenses there was some confusion on the offensive end," Robinson said. "We figured we would stick with that, do whatever coach told us to do."

Fisher's basket gave TCU its biggest lead at 67-50 with 8:35 to play, and Dixon's squad stretched the advantage to 19 before cruising the rest of the way into a date with the Jayhawks.

"We've got to come in and play the same way we played tonight - play with a lot of energy, get stops," Williams said, "and that's going to give us a good outcome."

TCU had lost 19 of its last 22 games to the Sooners, including its regular-season finale on the road last Saturday. But the Horned Frogs have now won tournament games three straight years.

Oklahoma gets a jumpstart on preparing for next season.

TCU will play Kansas, the tournament's No. 1 seed, on Thursday afternoon.