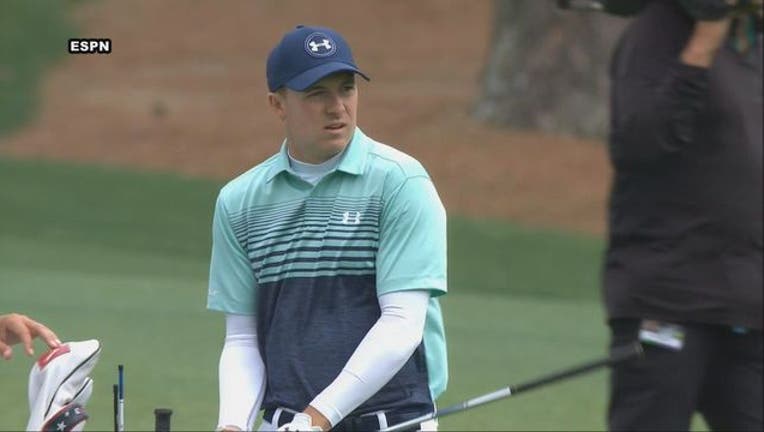 Jordan Spieth made a quadruple-bogey on the back nine at Augusta National again - but it came at the 15th hole instead of No. 12, and in the first round instead of the final one, leaving himself plenty of time to recover.

Spieth immediately took advantage of that cushion, making a birdie on the next hole and a tough par putt at No. 18 to limit the damage and post a 3-over-par 75.

"I didn't take my medicine," Spieth said about his struggles at No. 15.

The 2015 Masters champion acknowledged afterward he was too aggressive as he settled over an approach shot at the par-5 hole with 98 yards left to the flag. Swirling winds that gusted up to 40 mph required players to make adjustments all day, and when he didn't, Spieth paid a steep price.

"I was stuck in the '15th-is-a-birdie-hole mentality,' and it kind of bit me a little bit," he said. "I struck the shot well, I just hit the wrong club. I struck it very solid, I used a club that would spin instead of one that would maybe take the spin off.'

After the approach spun back off the green and into the pond, Spieth dropped from 78 yards but sailed his fifth shot over the back of the same putting surface. A too-long chip shot ran back down the front side and he needed three putts for a 9.

Last year, Spieth dumped two balls into Rae's Creek at the par-3 12th for a 7 while leading and effectively doomed his chances of defending the title. He was 3-under when he reached No. 12 Thursday and made a routine par there.

But the thunderous applause Spieth received when he stepped onto that tee was anything but routine. Plenty of the fans crowded around no doubt remembered how he'd dug himself a watery grave only a year earlier.

"I was a bit surprised at how loud the cheer was," Spieth said, chuckling, "when my ball landed about 35 feet away from the hole.

"But I was relieved to see it down and on the green. I guess everybody else felt maybe more than I did on it," he added. "But it was nice to make a 3 there and then capture (a birdie) 4 at the next. I really thought we had it going there."

"The tough part here (in windy conditions) is that a lot of (the course) is shielded and if you're five yards off, you could be in a very, very bad location. That's the toughest part," he said.

With another blustery day forecast for the second round, Spieth figured a sub-par round would vault him back toward the top of the leaderboard.

"That puts a little extra bit of pressure that I wouldn't have put on tomorrow, because I was thinking even par for the two days was a good score. So I feel like I need to snag something tomorrow.

"But do it," Spieth said, perhaps for his own benefit, "through patience and taking advantage of the par 5s."