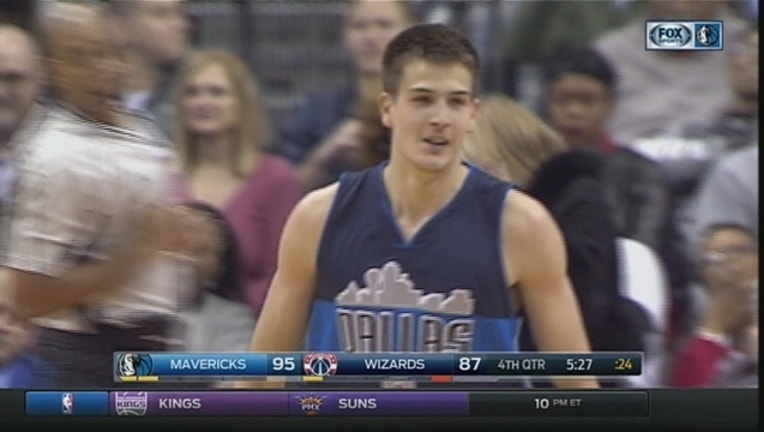 WASHINGTON (AP) - Dirk Nowitzki scored 10 of his 20 points in the fourth quarter, Harrison Barnes finished with 22 and the Dallas Mavericks boosted their slim playoff hopes with a 112-107 win over the Washington Wizards on Wednesday night.

Nicolas Brussino scored eight of his 11 points off the bench in the fourth for the Mavericks, who began the night 3 1/2 games behind Denver for the final postseason spot in the Western Conference. Portland was positioned between Denver and Dallas.

Wizards guard John Wall had 26 points and 11 assists despite briefly leaving the game in the second quarter with a sprained left foot.

Bradley Beal added 24 points as Washington dropped back-to-back games for the second time since its previous loss to Dallas on Jan. 3.

Fresh off a 4-1 road trip, the Wizards began Wednesday a half-game behind Boston for second place in the Eastern Conference. They led by as many as 12 in the third quarter and by seven at the end of it.

Brussino hit a pair of 3-pointers to stretch the lead to eight, and Nerlens Noel's follow-up dunk made it 97-87 and convinced Wizards coach Scott Brooks to call a second timeout in 72 seconds.

Wall left late in the second quarter after an awkward fall on a transition layup attempt. Defended by Noel, the four-time All-Star remained on the ground after his attempt hit the underside of the rim until Washington called a timeout 13 seconds later.

A few moments later, Wall was helped to his feet before limping to the locker room under his own power. He started the second half.

Wizards: Led after the first quarter for the first time in four games. . Scored 39 first-quarter points, one short of their most in a period this season. . Did not commit a turnover until the second quarter, but finished with 12.

Mavericks: At the Philadelphia 76ers on Friday night in Noel's first game against his former team.

Wizards: Welcome another team on the fringe of the playoff picture when the Chicago Bulls visit on Friday.