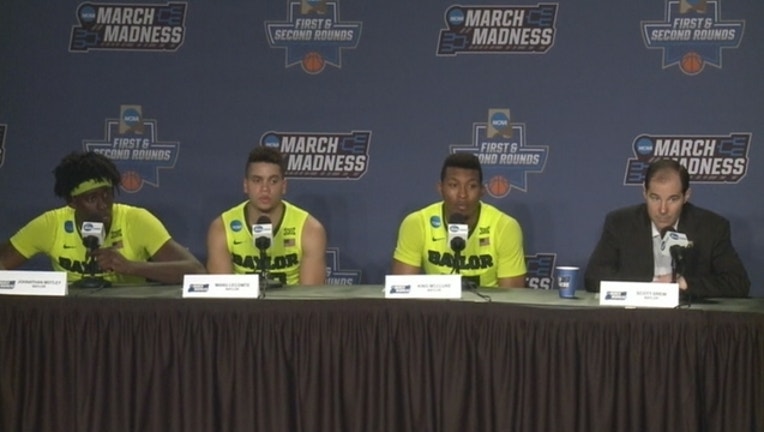 TULSA, Okla. (AP) - Johnathan Motley had 19 points and 10 rebounds, and No. 3 seed Baylor defeated No. 11 seed Southern California 82-78 on Sunday in the second round of the NCAA Tournament.

Terry Maston scored 19 points, King McClure added 17 and Manu Lecomte scored all 12 of his points in the final 5 minutes for the Bears (27-7), who advanced to play Duke or South Carolina in the Sweet 16.

Chimezie Metu scored 28 points and Bennie Boatwright added 16 for USC (26-10), which was trying to make its first Sweet 16 appearance since 2007. The Trojans had rallied from second-half deficits to win their first two NCAA Tournament games.

A four-point play by Lecomte put the Bears up 69-67. Lecomte, who hadn't scored the entire game, scored eight points in 45 seconds to put the Bears up 73-67, and Baylor led the rest of the way.

USC: The Trojans posted a school record with 26 wins and they have no senior starters. Coach Andy Enfield has reinvigorated the program since arriving on campus in 2013. Last season's trip to the NCAA Tournament was the school's first since 2011. The Trojans were trying to become the fourth team that played in the First Four to reach the Sweet 16.

Baylor: The Bears got off to a 20-1 start and were ranked No. 1 in the country before reeling down the stretch. They got back on track in a 91-73 win over New Mexico State in the first round of the NCAA Tournament. They went back to their recipe for success - physical dominance - by outrebounding the Trojans 34-23 on Sunday.

Baylor will play Duke or South Carolina in the Sweet 16 in New York.