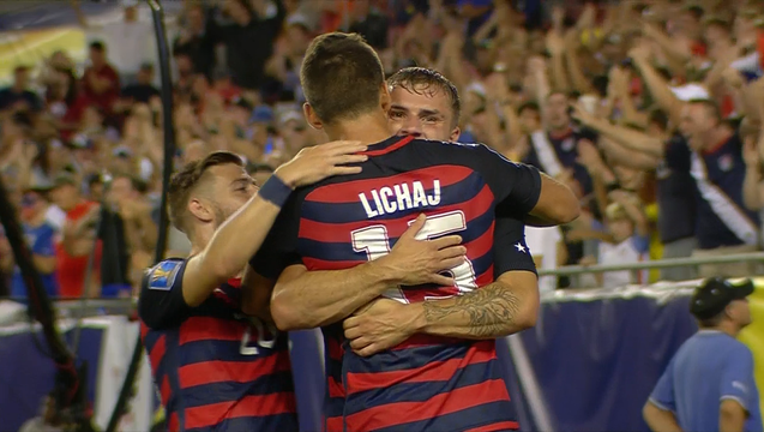 Morris' second goal of the game broke a tie in the 76th minute, and the U.S. edged tiny Martinique 3-2 Wednesday night after wasting a two-goal lead against a team that is not even a member of FIFA.

That hardly mattered to Jordan and his teammates, though, who rebounded from a disappointing 1-1 tie against Panama in their tournament opener last weekend.

"It's all about team, all about the three points," Morris said after the Americans improved to 31-1-4 during the Gold Cup group stage.

Martinique "made it very tough for us," Morris added. "It was a battle all night."

Failing to break through in the first half, the U.S. built a 2-0 lead on goals by Omar Gonzalez in the 53rd minute and Morris in the 64th.

But Martinique, a French overseas department, tied the score on a pair of goals by Kevin Parsemain in the 66th and 74th minutes. The first was a shot from the edge of the arc that took a bounce and went in off goalkeeper Brad Guzan's left arm. The second was a shot by Johan Audel that hit a leg of Parsemain , who was down on the field, and deflected in over Guzan, who had stopped Parsemain's initial attempt.

Morris got his fourth international goal just 98 seconds later. He spotted Gyasi Zardes streaking in on the left side, and Zardes laid the ball back for the 22-year-old forward, who scored with a right-footed shot from just past the penalty spot.

"They didn't stop running, didn't stop playing," Gonzalez said. "We need to be smarter, more focused throughout the entire game."

The U.S., which opened last weekend with a 1-1 tie against Panama, completes group play Saturday in Cleveland against Nicaragua, which lost to Panama 2-1 earlier Wednesday.

"We're certainly guilty of making the game a lot more difficult on us than it needed to be," said U.S. coach Bruce Arena, who thought his team played well.

Using a mostly junior varsity lineup in the tournament, the U.S. leads Group B with four points, ahead of Panama on goal difference. Martinique is third with three, following by Nicaragua with none. The top two teams in each of the three groups advance to the quarterfinals along with the two best third-place teams.

"I saw a lot of good performances out of some of our players. A lot of positives there," Arena said. "One of the things we're trying to do in this tournament is really look at some players in our pool that we haven't seen much of and help us make some decisions for qualifying in September and October."

One of just three holdovers from the starting lineup last weekend, Gonzalez scored his second international goal after Martinique failed to clear Kellyn Acostas corner kick. Paul Arriola's deflected shot from outside the penalty area was parried by goalkeeper Kevin Olimpa and fell to the defender, who poked in the rebound with his left foot from 4 yards.

Morris doubled the lead when second-half substitute Alejandro Bedoya passed to Eric Lichaj running down the right flank, Lichaj crossed and Morris redirected the ball in.

Midfielder Cristian Roldan made his U.S. debut and defender Justin Morrow his first international appearance in 4? years as Arena made eight lineup changes. Lichaj had not played for the national team since May 2016.

The U.S. and Martinique had met just once before, with the Americans winning 2-0 in the group stage of the 2003 CONCACAF Gold Cup.

Martinique is part of Windward Islands and has a population of just 385,000. As an overseas department of France, it is not eligible for World Cup qualifying or other events governed by FIFA.

"A lot of pleasure from this game. Too bad that we got scored on right after coming back," Martinique coach Jean-Marc Civault said through a translator. "Honestly, the U.S. was superior in keeping the ball, but I'm very proud of my players' performance."