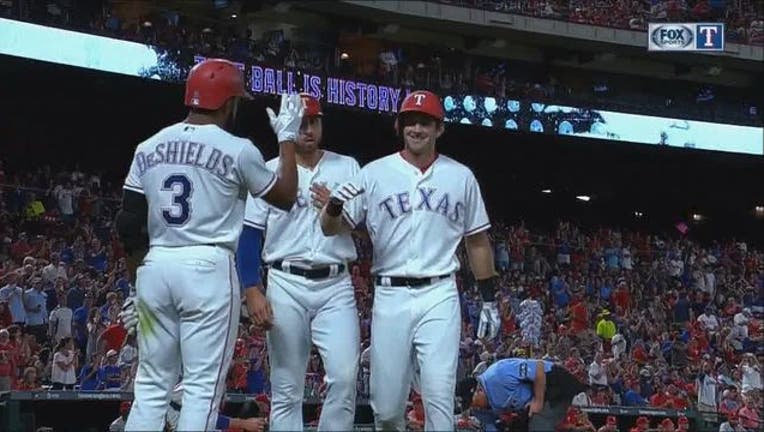 ARLINGTON, Texas (AP) - Andrew Cashner finally won in his home state of Texas, pitching seven solid innings to help the Rangers match the longest winning streak in the majors this year at eight games with a 9-3 victory over the Philadelphia Phillies on Wednesday night.

The right-hander from the Houston area also got his first win with the Rangers, who scored all nine runs in the first five innings after getting just six in the first six starts by Cashner (1-3) when the stocky 30-year-old was in the game.

Jared Hoying hit his first big league homer and had his first four-hit game in his second start since coming up from the minors to replace center fielder Carlos Gomez, who is expected to miss at least a month with a right hamstring strain.

Delino DeShields matched a career high with four hits, all singles that included two bunts and another infield hit.

Shin-Soo Choo had three hits with three RBIs among a season-high 17 hits for the Rangers, who matched the Yankees for the longest winning streak this season and are on their best run since August 2013. The defending AL West champs (21-20) are over .500 for the first time this year.

Zach Eflin (0-1) allowed 11 hits and seven runs in four innings as the Phillies dropped to 3-11 in May. The right-hander hit Joey Gallo with a pitch in the third to become the first Phillies pitcher since at least 1913 to hit a batter in five straight games.

Michael Saunders ended Cashner's shutout bid in the seventh with his fourth homer of the season, a two-run shot.

Austin Bibens-Dirkx made his big league debut at 32 out of the Texas bullpen in the ninth, allowing a run after hitting the first batter he faced, Aaron Altherr. Bibens-Dirkx spent 12 years in the minors and pitched in an independent league last year.

Phillies: LF Howie Kendrick, who has been on the disabled list for a month with a right abdominal strain, is still experiencing soreness. But manager Pete Mackanin hopes he can take batting practice this weekend in Pittsburgh and possibly return next week after a brief rehab stint.

Rangers: Choo returned after missing two games with back spasms. He was surprised he felt good enough to play, although he said the injury initially didn't feel as severe as back inflammation that prompted one of his four trips to the DL last season.

Phillies: Rookie RHP Nick Pivetta (0-2, 6.14 ERA) makes his fourth career start in the series finale with the Rangers. The 24-year-old has allowed 23 hits and five walks in 14 2/3 innings.