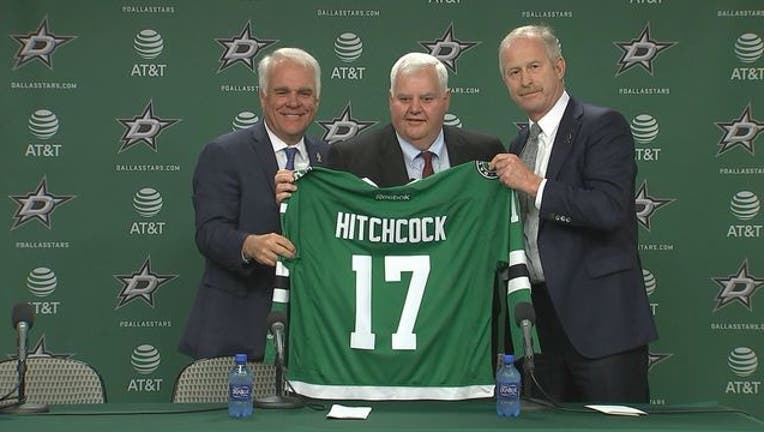 DALLAS (AP) - Ken Hitchcock feels like he is coming home with his return to the Dallas Stars, more than 15 years after they fired the coach who led them to their only Stanley Cup championship.

Hitchcock also knows his re-introduction to Dallas is about now - not then.

"I study history. I look at it all the time, but I don't live in it," the veteran coach said Thursday. "The history that was brought on here are just great lessons for us, an ultimate team. That's what was here before, and that's the goal again. ... The game has changed, it's changed a lot."

Hitchcock, who led the Stars to their only Stanley Cup championship in 1999 and went again a year later, replaces Lindy Ruff, whose contract expired at the end of his fourth season as the Stars missed the playoffs for the fifth time in seven years.

"This is really not about Ken accomplished here, which was the ultimate success ... and all about what Ken Hitchcock can bring to this franchise right now," team president and CEO Jim Lites said.

When Dallas fired Hitchcock in January 2002, he had won 277 of his 503 games over parts of seven seasons in his first NHL head-coaching job. He led the Stars to five straight division titles, with consecutive Western Conference championships in 1999 and 2000. Those are the only times he or the Stars have made it to the Stanley Cup Final.

"He's been there, done that and that's what you want in a coach," team captain Jamie Benn said. "You want a guy that's won, you want a lot of experience and his resume backs it up really well."

Hitchcock also coached the Philadelphia Flyers (2002-06), Columbus Blue Jackets (2006-10) and St. Louis (2011-17). The Blues made the playoffs in each of Hitchcock's five full seasons, reaching the Western Conference final last spring after beating top seed Dallas in a seven-game series in the second round. St. Louis abruptly fired Hitchcock on Feb. 1, cutting short what was already going to be his last season with the Blues after their fifth loss in six games.

The 65-year-old Hitchcock said he initially didn't want to get back into coaching. That changed when he started getting calls from other coaches seeking his advice. He said he helped out 15 at different levels in the game.

"I was so excited and thrilled of his passion and energy that he had to get back to coaching," Nill said. "He's recharged, he wants to make a difference."

Nill was still an assistant GM with the Detroit Red Wings when Hitchcock was a guest coach on Mike Babcock's staff during training camp in 2010.

The Stars went 34-37-11 this season to finish 11th in the West. Their 79 points were the second-fewest in a full season since moving to Dallas in 1993-94, and came a year after they led the conference with 109 points.

In 20 NHL seasons, Hitchcock has 781 career regular-season victories, fourth all-time and one shy of Hockey Hall of Fame coach Al Arbour for third. Hitchcock has coached 1,454 regular season games and 168 more in the playoffs.

Hitchcock's demanding style centered on defense will be a change for these Stars, with young elite scorers Benn and Tyler Seguin. Hitchcock believes Seguin can be a No. 1 center like Mike Modano was in the coach's first tenure.

"I want to be a No. 1 center and also a two-way guy," Seguin said. "I know Hitch is obviously hard on players and I know that we're going to have a good relationship and he's going to be hard on me. I want us to be able to say it works out in the end."

The Stars clearly need to improve on defense. With their two-goalie system, they finished last in save percentage and second-to-last in goals-against average.

"I think Hitch is going to not get us out of our scoring ways, but he's going to teach us how to play defense," Benn said.