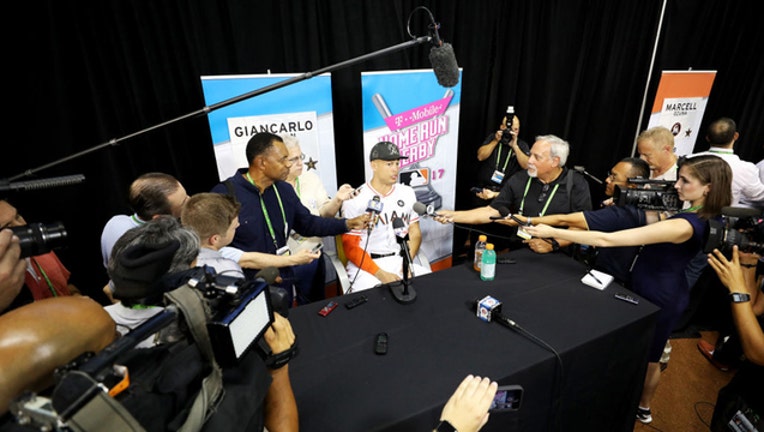 The Boston Red Sox ace will start Tuesday night's game for the American League, and Washington's Max Scherzer will open for the National League.

Then with the Chicago White Sox, Sale pitched the first inning of last year's game at San Diego and allowed a two-out home run to Kris Bryant. Sale was traded in December for top prospects.

"All my family lives here. Brothers, sisters, in-laws, parents, even my aunts and uncles and cousins," Sale said. "So to be able to be here not too far from where I live now is nice. I can have my family, extended family come down and experience this with me."

Scherzer also will be making his second All-Star start. Then with Detroit, he pitched a perfect inning at New York's Citi Field in 2013, when Sale followed with a pair of 1-2-3 innings and got the win. Scherzer will be the fifth pitcher to start All-Star Games for both leagues, following Vida Blue, Roger Clemens, Roy Halladay and Johnson. Scherzer is 10-5 with a 2.10 ERA and 173 strikeouts.

Sale and Scherzer took turns complimenting each other at Monday's announcement of the All-Star lineups.

"I love the way Chris goes out and competes. ... He'll do anything to win. He makes big-time pitches all the way - even if he takes 120 pitches. By far he's been one of my favorite players, pitchers to watch. It's even better to compete against him," Scherzer said.

"I could almost say the same thing. I don't know if I've seen a guy compete as hard as he competes day in and day out," Sale said. "The fire, the intensity, the role model he can be for kids coming up to kind of take the bull by the horns and just compete. It's fun."

Long before they turned pro, Sale and Scherzer both played for the La Crosse Loggers in a summer league in Wisconsin. They were there a couple years apart.

"So that's pretty interesting too. We've had some ties for a while and played against each other for a while, too," Sale said.

Los Angeles Dodgers ace Clayton Kershaw, 14-2 with a 2.18 ERA, is ineligible to pitch in the All-Star Game because he started Sunday.

Maddon said it was a "pretty easy decision" to slot Stanton as the DH.

"Looking at the breakdown of the team positionally, I thought to draw a DH out of the outfield was smart, or possibly a first baseman, having three outstanding first baseman," Maddon said. "And furthermore playing here under the circumstances I thought it was the right thing to do."

Judge tops the majors with 30 home runs and is among the leaders in several other hitting categories. Mills said he wanted to see the rookie bat early - and figured a lot of fans did, too.

"Where was I going to hit him in the lineup? It was a situation you wanted him to hit in the first inning because of the story he's been all year long," Mills said.

Sale and Scherzer were set to face big hitters in a homer-filled season.

"I give up my fair share of homers. You can check the book. It happens," Sale said. "If you let that creep in your mind, it's going to be a long night. I'm going to do the same thing I always have."

Scherzer is well aware that home runs are up.

"The way I've been looking at it, ball is flying for whatever reason. I really don't care," he said. "I've given up a lot of homers over the past year and a half."

"That's really been something that's been a thorn in my side. I've had to become a better pitcher, locate better. Because of the home run spike, I've dialed it in even more to try to make my location better to try to prevent them. I think I have a hand in it, in not letting them hit as many homers out, and that's made me a better pitcher," he said.

"Getting this responsibility is very humbling," Mills said. "I'm thrilled to be here. I definitely would love to have him sitting here in this chair."