HOUSTON - The Houston Astros struggled to get their bats going in Game 1 of the 2021 World Series leading to a loss to the Atlanta Braves, 2-6. The Braves got up early in the game and the Astros weren't able to climb back from under Atlanta's lead.

Atlanta's Jorge Soler hits a home run to start Game 1 of the World Series. Braves lead the Astros, 0-1. Freddie Freeman was called out at first after getting an infield hit. Ozzie Albies got on base and won America a free taco by stealing a base. Albies scored after Austin Riley hit a double. Braves increase their lead, 2-0. Valdez strikes out Eddie Rosario leaving the Astros one out away from closing out the Braves' strong start. Adam Duvall hits a ball deep that is caught finishing out the top of the first inning.

Jose Altuve leads the Astros' batting order with a strikeout. Michael Brantley gets on base with a hit to right field. Alex Bregman hits a breaking ball and is out at first. Yordan Alvarez gets walked to first base. The Astros now have two players on base. A wild pitch allowed both runners on base to advance. Players are now on second and third base with two outs as Carlos Correa is up to bat. Correa gets walked loading the bases. Kyle Tucker hit a ground ball just past first base and was thrown out.

Score at the end of the first inning is Braves 2, Astros 0. 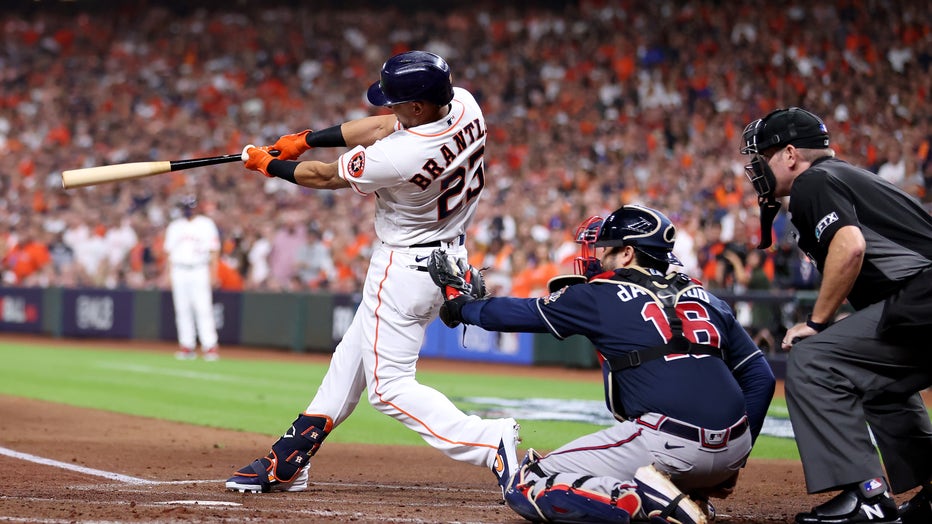 HOUSTON, TEXAS - OCTOBER 26: Michael Brantley #23 of the Houston Astros hits a single against the Atlanta Braves during the first inning in Game One of the World Series at Minute Maid Park on October 26, 2021 in Houston, Texas. (Photo by Carmen Manda

Travis d'Arnaud leads of hitting at the top of the second inning for the Braves with a base hit. Joc Pederson got a base hit and is on base as well. Dansby Swanson hit a fly ball deep into center field that is caught. Both runners advanced to second and third base. Jorge Soler hit a ground ball toward the short stop allowing d'Arnaud to score while Pederson was out at third. Braves lead 3-0. Freddie Freeman gets walked leaving two runners on base with two outs. Bases are loaded after Ozzie Albies was almost thrown out at first. The Astros were able to escape this bases-loaded situation with the strikeout of Austin Riley.

Jose Altuve gives the Astros their first out of the inning with a strikeout. Michael Brantley hits a double to get on base. Alex Bregman was thrown out at first by the third baseman, giving the Astros two outs. Yordan Alvarez strikes out to finish the third inning. Braves are ahead 5-0. Astros have yet to score. 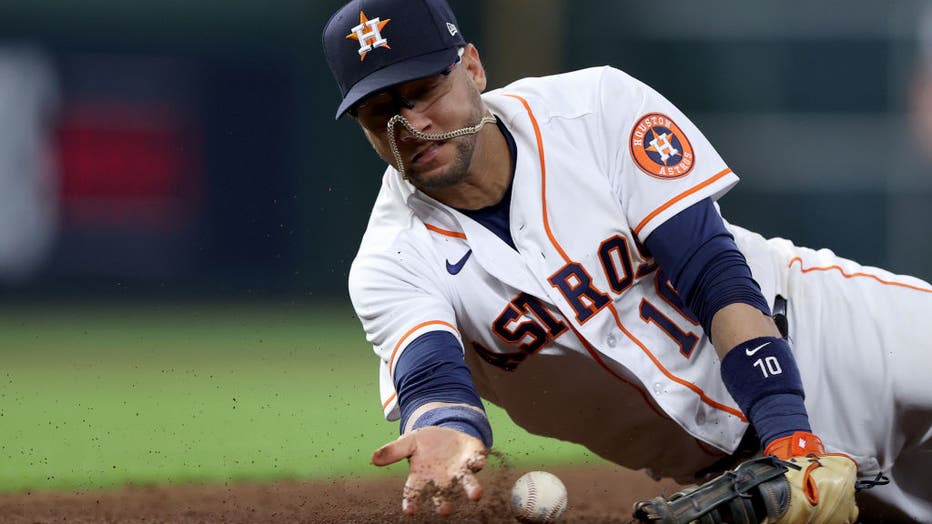 HOUSTON, TEXAS - OCTOBER 26: Yuli Gurriel #10 of the Houston Astros attempts to field the ball against the Atlanta Braves during the fourth inning in Game One of the World Series at Minute Maid Park on October 26, 2021 in Houston, Texas. (Photo by El

Jorge Soler begins the fourth inning with a strikeout, giving the Braves their first out of the inning. Freddie Freeman was also struck out by Jake Ordorizzi. Ozzie Albies got on first base due to an error by Yuli Gurriel. Ordorizzi strikes out Austin Riley to end the Braves offensive efforts during the fourth inning.

Carlos Correa hit a ground ball to the second baseman and was thrown out at first. Kyle Tucker hit a double toward right field and gets on base. Yuli Gurriel got a base hit sending Tucker to third base. Runners are on first and third base. Chas McCormick gets on base due to an error Dansby Swanson allowing Tucker to score the Astros first run of the night. Gurriel is on third base.

Martin Maldonado was struck out giving the Astros their second out of the inning. Jose Altuve hits a pop fly ball that is caught ending the fourth inning. Braves still hold the lead, 5-1

Eddie Rosario grounds out to second base starting the inning with an out. Adam Duvall was struck out by Jake Odorizzi. Odorizzi strikes out Travis d'Arnaud to end the top of the fifth inning.

Michael Brantley hit a fly ball deep into left field that was caught. Alex Bregman was struck out. Yordan Alvarez hits a fly ball that is caught, ending the fifth inning. Astros trail the Braves, 1-5.

Joc Pederson hits a fly ball into right field that is caught. Dansby Swanson hit a ball into left field getting on base. The Astros swap out Pitcher Jake Odorizzi for Phil Maton in response to Swanson's hit. Jorge Soler is struck out giving the Braves two outs. Freddie Freeman gets an infield hit and is almost thrown out at first base. Ozzie Albies hits a ground ball to the shortstop and is thrown out at first base ending the top of the sixth inning.

Carlos Correa strikes out with a controversial call by the umpire. Kyle Tucker hit a single and gets on base. Yuli Gurriel singled out allowing Tucker to get to second base. Chas McCormick is struck out to end the sixth inning.

Austin Riley is struck out by Phil Maton to start the seventh inning. Eddie Rosario hit a double deep to left field. Adam Duvall gets walked putting two runners on base with one out. Travis d'Arnaud hits a ground ball to the shortstop and the Astros get a double play to end the top of the seventh inning.

Jason Castro grounded out to begin the bottom of the seventh inning for the Astros. Jose Altuve is struck out leaving the Astros with one more out before the end of the inning.

Michael Brantley singles into left field getting on base. Alex Bregman strikes out ending the seventh inning.

Joc Pederson gets a hit and is thrown out at first by Jose Altuve. Dansby Swanson gets walked. Jorge Soler hit a ground ball and Pitcher Ryne Stanek commits an error to allow Swanson to get to third base. Freddie Freeman pops into right field and is out. Swanson tags up and scores a run. The Astros are down 1-6. Ozzie Albies hits a ground ball toward second base and Soler is tagged out.

Yordan Alvarez tripled to start off the bottom of the eighth inning. Carlos Correa hits a sacrifice single allowing Alvarez to score. Astros are down 2-6. Kyle Tucker strikes out leaving the Astros with one more out before the inning ends. Yuli Gurriel hits a deep ball into center field and tries to run to second base, but is tagged out. 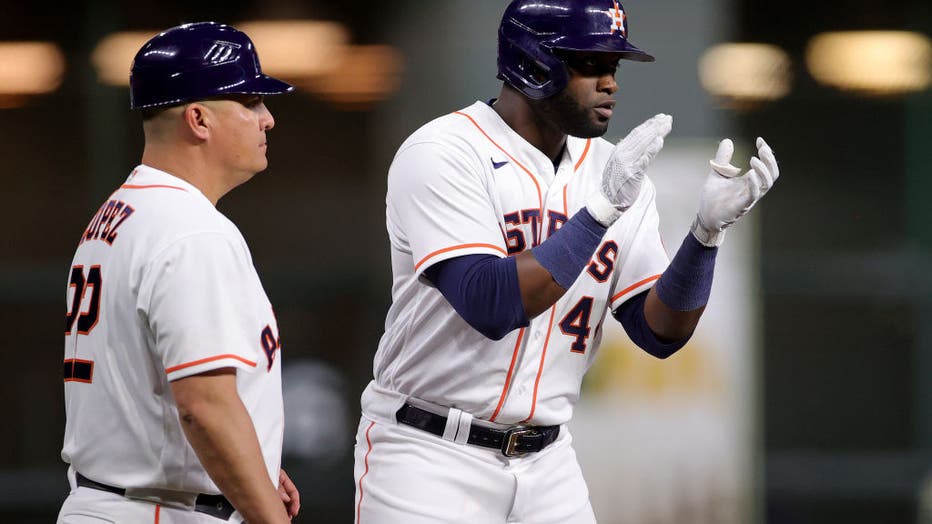 HOUSTON, TEXAS - OCTOBER 26: Yordan Alvarez #44 of the Houston Astros hits a triple against the Atlanta Braves during the eighth inning in Game One of the World Series at Minute Maid Park on October 26, 2021 in Houston, Texas. (Photo by Carmen Mandat

Austin Riley hit a fly ball out into left field that was caught. Eddie Rosario he a short ball and was easily thrown out at first base. Adam Duvall strikes out ending the Braves offensive efforts in Game 1 of the World Series.

The Astros were 51-30 on their home turf in 2021. Houston has a team slugging percentage of .443 this postseason, Yordan Alvarez leads them with a mark of .794, including seven extra-base hits and nine RBIs.

The Braves posted a record of 46-35 away from home in 2021. Atlanta has a team batting average of .250 this postseason, Eddie Rosario has led them with an average of .474, including five extra base hits and 11 RBIs.