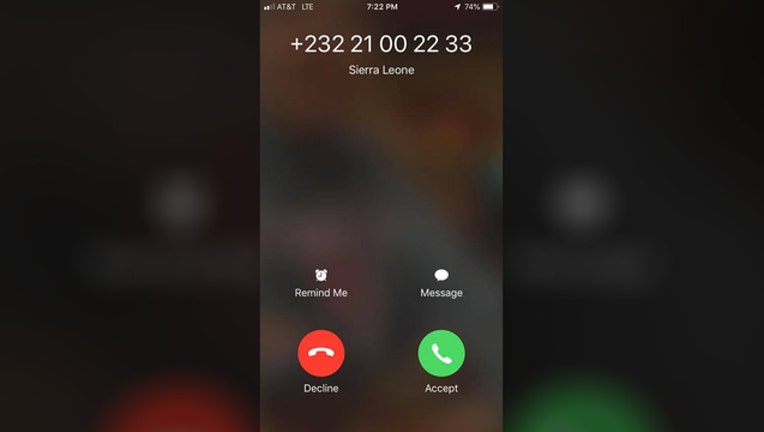 DALLAS - If you are one of the many people who has gotten a late-night call from Sierra Leone, don’t be tempted to call the number back.

The Federal Communications Commission is warning people about a reported wave of the so-called “one ring” or “Wangiri” scam.

Robocallers allegedly target specific area codes in bursts and often call multiple times in the middle of the night. They hang up after one or two rings.

Their goal is to get people to call them back, which often results in a toll that is paid to the scammer.

The FCC said recently the calls have been coming from a 222 or 232 country code, which are the West African countries of Mauritania and Sierra Leone.

Many North Texas residents have complained about receiving repeated calls from Sierra Leone throughout the night.

Plano Police Department Officer David Tilley said he’s gotten at least five of these calls recently, including one at 4:50 a.m.

“Now what can you do you might ask? Well, about all I can tell you is if you receive a call from a number that begins with 222 or 232, DO NOT ANSWER and DO NOT CALL BACK. This system works similar to 900 numbers so if you call the number back, you will be charged for the call,” Officer Tilley said on the department's Facebook page.

The FCC advised the same. You should never call back a number you don’t recognize, especially one that appears to originate overseas.

Blocking the number doesn’t always work because the robocallers change numbers. But, many phone companies do allow you to block calls international calls or calls from specific regions.

You can also file a complaint with the FCC at www.fcc.gov/complaints.

“Advances in technology allow massive amounts of calls to be made cheaply and easily. In addition, spoofing tools make it easy for scammers to mask their identity. The FCC is working to combat scam calls with enforcement actions, a strong push for caller ID authentication, and support for call blocking tools,” the agency said.