Many in North Texas spotted a meteor blasting through the sky Sunday night. And now with Ring doorbell cameras prevalent, many captured the remarkable sight as it happened.

DALLAS - Many in North Texas spotted a meteor blasting through the sky Sunday night. And now with Ring doorbell cameras prevalent, many captured the remarkable sight as it happened.

The images captured on dash cams and doorbell cameras are remarkable.

Just before 9 p.m. Sunday, a ball of fire shot down across the horizon and created a flash before it disappeared.

‘When it flashed and brightened up, I am assuming that is when it started to fracture into pieces," explained Ryan Bennett, planetarium manager at the University of North Texas. "Rocky stuff burns up. Heavier metal is what is left."

Bennett says meteorites are valuable, so there are likely people searching to see if parts of it made it to the ground. 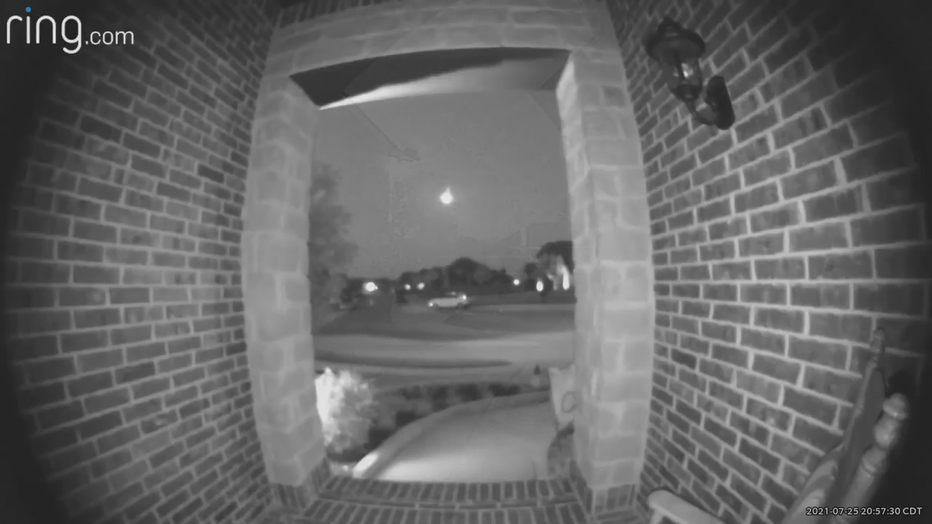 "There is value because a lot of precious metal, but also because they are rare," he said. "You are holding something 4 billion years old that has not been altered very much at all. So you have one of the oldest pieces of history you can."

Bennett says seeing a meteor this time of year is not surprising.

July and August are when the Earth passes below the debris field left from Comet Swift-Tuttle, which was discovered in 1862.

"As Earth moves through debris fields, gravity starts capturing debris and it falls back to earth," Bennet said.

Fortunately, the heavy chunks of iron don't hit people most of the time.

"A lot more land than people. So the probability is it will hit land," Bennet said. "But there was one in Arizona that went through someone’s roof."

Now, the mystery is if the meteor made it to the ground.

"A lot of people want a piece of space probably rarer than diamonds," Bennett said.

The American Meteor Society says it got reports of people seeing this meteor in five states, some as far away as Missouri. In Texas, it was spotted as far south as the San Antonio area.