MANSFIELD, Texas - A 15-year-old kicker is about to make history for Timberview High School in Mansfield ISD.

She tried out this year, first starting on JV, and worked her way up.

The teen grew up surrounded by football, but her sport of choice is and always has been soccer.

Prior to this season, she had the idea of kicking footballs with the boys.

"I’m used to kicking a ball, so, I mean, it can’t be that much different than soccer, right?" she said.

Young grew up with the team. Her father has been their defensive line coach for 16 seasons.

She decided to try out this season.

After several games on the JV squad, the sophomore moved up to varsity where, she shares extra-point and kickoff duties with another kicker. 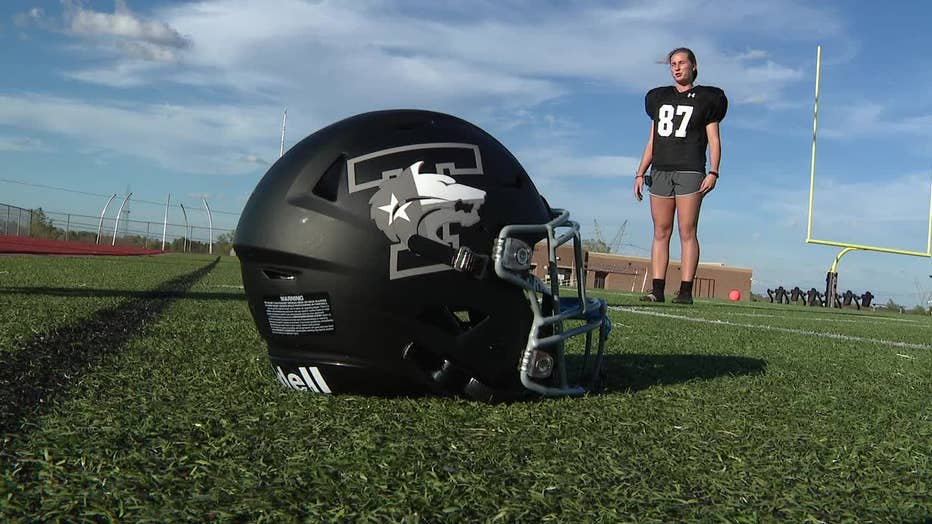 "I treat her just like any other player," her father said. "If she messes up, she’s going to get it, you know, just like anybody else on the field gets it."

She’s made 15 of 20 extra points this season, according to the district.

She’s set to kick in first game of the playoffs Friday. The first female in school history to do so.

She hopes to be an inspiration to other girls.

"Just try it, you never know. If you can, might as well," she said.

To some, it might seem out of place, but her teammates say she’s one of them.

Young said, if anything, they’re almost too nice.

"I think they’re a little more chill around me. They’re not as crazy," she added.

Is Young’s dad nervous about his daughter getting hurt?

"We always tell her, you know, you got to make a business decision because, you know, this is your second sport. Soccer’s your first sport," he said.

But he said he’s not at all nervous about her performance on the field.

The teenager, however, believes when it’s time to kick, he hides emotions.

Young said she has no fear while kicking.

But, just in case, she wears lucky number 87.

"It was my dad’s football number, it’s been in the family, so might as well carry on the tradition," she said.