We are finally seeing some positives reemerging when it comes to Downtown Dallas businesses, but a full rebound could take years.

DALLAS - We are finally seeing some positives reemerging when it comes to Downtown Dallas businesses, but a full rebound could take years.

Before the pandemic, about 135,000 people would come downtown on any given day, for work or play.

That number plummeted down by about 70%, but there are some positive signs.

A couple of new restaurants have opened up downtown, and a popular museum is ready to welcome back guests.

Like most of the country, Downtown Dallas remains in a financial funk.

Office buildings typically packed with people are currently 25% occupied, with many employees still working from home.

“I'll admit this is brand new territory. I can't go back in history and find playbook is going forward,” John Zogg said.

Zogg is the managing director of Crescent Real Estate Equities. He spoke during a virtual town hall Thursday hosted by Downtown Dallas Inc.

He said a lack of foot traffic has hurt business, but they're working with their tenants to stay put.

“We've gone through and reworked every single, all 20 of those leases have been redone in some fashion,” Zogg said.

He added that hotel capacity won't return to pre-pandemic occupancy numbers for about two years. 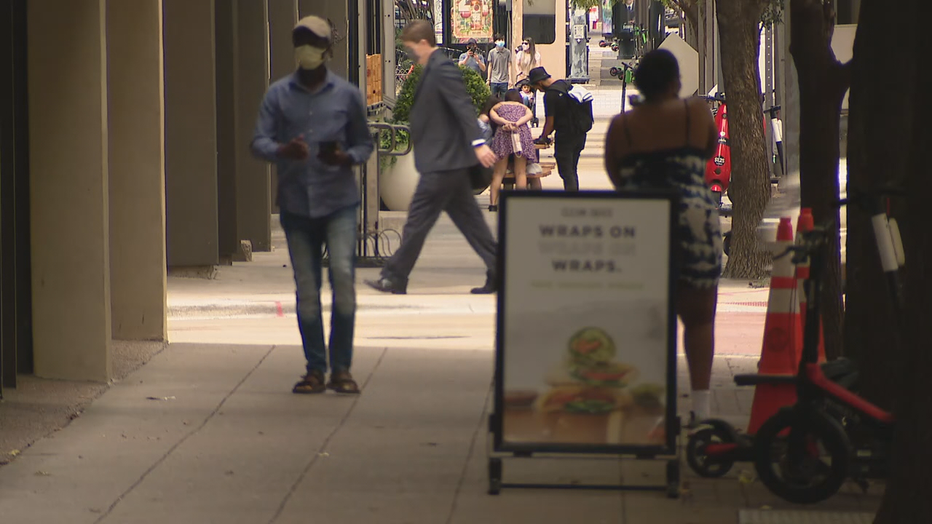 “The unemployment rate is down, so the situation is getting better, but we have a long, long way to climb,” he explained.

There are some positive signs for downtown.

Several new restaurants have opened up in recent months, including True Kitchen & Kocktails on Elm Street.

Two new parks are under construction, including one in the West End, and the farmer's market has a full fall schedule.

“We have over 200 restaurants, shops and museums open in Downtown Dallas. We know that performance programming is coming back to the Arts District,” said Kourtny Garrett, with Downtown Dallas Inc.

The Perot Museum reopens Saturday, September 12, for the first time since March.

“Just the weekends and we will have a limited number coming through the doors, so we encourage everyone to go online and purchase tickets in advance,” said Linda Silver, with the Perot Museum. “We've got five floors of exhibitions. Our dinosaurs have been lonely. We're looking forward to welcoming everyone back.”

Many hotels are offering deals to try to drum up business.

Downtown Dallas Inc. expects foot traffic to increase in January 2021, when about 50% of workers are expected to return to the office.