Cowboys fans in RVs ahead of Thanksgiving game dealing with rainy, cold weather

Some diehard Cowboys fans who were camping out at AT&T Stadium Wednesday would prefer a warmer, drier forecast.

ARLINGTON, Texas - Some diehard Cowboys fans who were camping out at AT&T Stadium Wednesday would prefer a warmer, drier forecast.

They're not in tents, but they don't want to be couped up in their RVs the entire time until they can get inside the stadium for the Giants game on Thanksgiving.

People with RVs were tailgating a day early for the Cowboys’ Thanksgiving Day game.

While fans like Champion hope the Cowboys will be eating celebratory turkey after a win, they were eating their meals in the parking lot before the game.

"We’re going to drop that big ol’ turkey off in there," Champion said. "We’re going to have the Turkey deep down and just ready. Turkey, sweet potato pie." 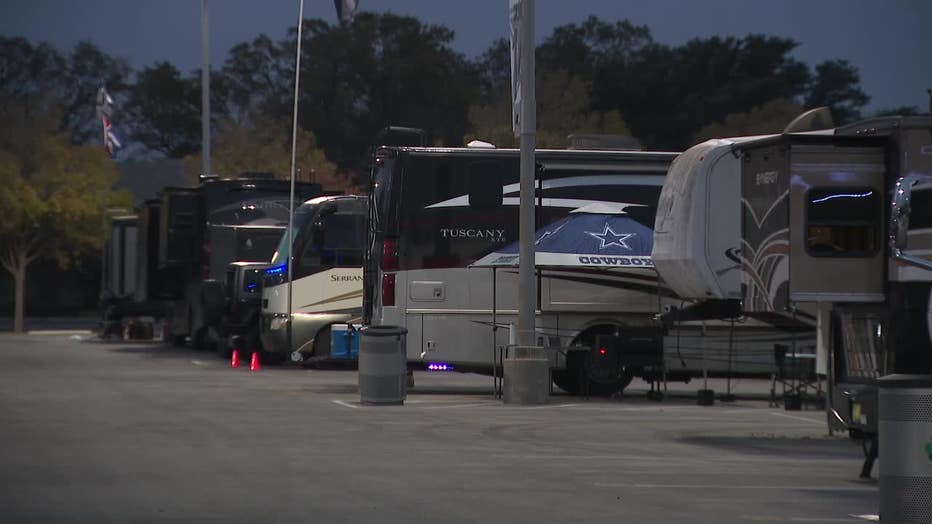 It’s not a traditional setting for a Thanksgiving meal, but fans said it’s the place to be.

Neri even brought a newcomer with him from El Paso.

It’s also the first time for 9-year-old Jett Martin and his younger brother, Jaxon. Lucky for them, their father said they have tickets to the game.

Neri said Thanksgiving is all about togetherness.

"It’s quite a buildup to the event," he said. "Family, it’s a gathering, right?"

"You saw outside people singing and dancing and having a good time," Cowboys fan Art George.

But they said the holiday will be a lot sweeter if a Cowboys win is on the menu for dessert.

"Ain't that what Mohammed Ali said? I float like a butterfly and I sting like a Dallas Cowboy, you better watch out," Champion said.